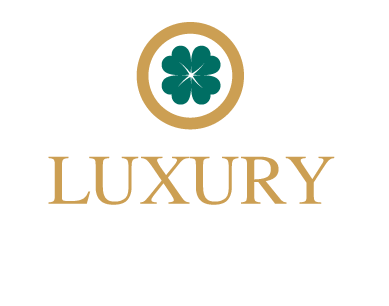 When you book with an account, you will be able to track your payment status, track the confirmation and you can also rate the tour after you finished the tour.
Sign Up
287

Why Book With Us?

Fall in love with Ireland with this Luxurious Irish Romance Tour.
Embrace Ireland’s breathtaking landscapes and rolling countrysides. Meet friendly locals, discover quaint villages and explore Ireland’s natural wonders.
With historic sites and wildlife all around, impeccable accommodations and fine dining each day, this is a luxury road trip to remember.

You will fly into Shannon Airport on the west coast of Ireland (or Dublin Airport). Upon arrival, you will be met by your friendly Chauffeur Tour Ireland representative. You will be helped with your bags and escorted to your luxury vehicle. Your romantic tour of Ireland is officially underway. You will journey west, sweeping across the rugged Irish countryside. The first stop of the day will be at the Rock of Cashel. Buried in the heart of the Ancient East, the Rock of Cashel is home to over 1000 years of Irish history. You can tour round the 13th century cathedral and the 15th century castle. Without a doubt, the highlight is the round tower which stands at over 25 meters high and is the oldest remaining building on the rock.

You will meander south until you reach Blarney Castle, which dates back to the 12th century and was built by the notorious Clan Chief, Cormac MacCarthy. You can tour the ancient castle and gardens, though we highly recommend finding the Blarney Stone. Legend has it that if you kiss the stone, you will be rewarded with the “gift of the gab”.

Your driver will then head south, taking you through the charming city of Cork. Cork is a trendy city which enjoys a refreshing blend of cosmopolitan bars and traditional Irish pubs. Why not stop off and enjoy a well-earned pint of Guinness.

After an exciting day touring, you will be dropped off at Fota Island Resort. Situated on its own private island, this luxury 5-star hotel is the ultimate retreat for romantic honeymoons.

After a luxurious breakfast, you will leave Fota Island and start your journey along the Wild Atlantic Way. You will travel through quaint coastal towns like Schull and Ballydehob. Make sure to have your camera with you, the coastal views are outstanding.

You will begin to wind your way north until you reach Bantry House & Gardens, a great place to stop for afternoon tea. Stroll around the Palazzo-inspired gardens which were designed by the Earl of Bantry to reflect the iconic garden architecture he saw when travelling to the continent.

Routing north, you will reach the town of Kenmare. Kenmare is steeped in Irish history and was declared a heritage town in 1994. You will tour the heritage centre that includes exhibitions about the Great Famine and Kenmare’s rich history. If time permits, you can visit the ancient stone circles of Kenmare.

Finally, you will weave through Killarney National Park. The park is “heaven on earth” for the keen photographer, with many glorious lakes and trees. You will be dropped off at the Europe Hotel. This luxurious 5-star hotel is renowned for being one of the best hotels in Ireland. Enjoy fabulous views over Killarney Golf & Fishing Club and the Lakes of Killarney. Expect a warm Irish welcome and service of the highest quality.

After breakfast, you will begin your journey around the famous Ring of Kerry. You will work your way through Killorglin and Glenbeigh, stopping off to view the breath-taking Rossbeigh Beach. Enjoy the sandy beach, fresh sea breeze, and views of the Atlantic Ocean. Then, continue to journey down the coastline until you reach Cahersiveen. This authentic Irish town is a great stop for lunch and is the birthplace of the revered Irish political figure Daniel O’Connell.

You will meander down the coast until you reach a point where you can view Valentina Island. If you are a Star Wars fan, make sure to have your camera at the ready as you will pass the famous Skellig Island that featured in “The Force Awakens”. You will continue to journey around the awe-inspiring coast until reaching Sneem Village, otherwise known as “The Way The Fairies Went” — so make sure to keep your eyes peeled! The views are simply outstanding on this stretch of the Ring of Kerry, known as “the knot” because it ties together where the mountains and water meet.

You will continue north until reaching Moll’s Gap, a famous mountain pass that cuts through the MacGillycuddy’s Reeks mountains and is one of the most popular photo stops in Ireland. From Molly’s Gap, you will weave through Killarney National Park. If time permits, you can also tour Muckross House and Gardens. Set in the heart of the national park, near Muckross lake, this 19th century mansion was designed by well-known Scottish architect William Burn. After touring Muckross House, you will make the short trip back to The Europe Hotel, where you can enjoy a relaxing evening.

Make sure to have a hearty breakfast, as you will need fuel for your great adventure ahead. Your driver will take you north up the Wild Atlantic Way. You will stop at Adare Manor, a luxurious 5-star estate hotel which is the perfect venue for brunch. Enjoy incredible views over the 2026 Ryder Cup venue while enjoying exquisite cakes and the finest champagne.

You will then pass through Limerick and stop off at Bunratty Castle. This iconic Irish castle is over 500 years old and sits by the glinting river Raite. As you tour this ancient castle you get a real sense of being transported back to medieval Ireland.

Hurtling up the west coast you will reach the famous Cliffs of Moher. This iconic Irish tourist stop was voted the best tourist attraction in 2019 and 2020. The cliffs tower above the Atlantic Ocean at over 700 feet high and 5 miles wide. Make sure to have your camera at the ready, the views are truly incredible.

Routing inland, you will drive through Burren National Park. This stunning national park is home to an obscure limestone landscape, that looks almost manmade. The swirling and circular limestone structures show off the creativity of Mother Nature.

Lastly, you will reach the delightful town of Galway. You will drive past famous sites including the Cathedral of Saint Nicholas and the old Spanish Arch before being dropped off at Glenlo Abbey Hotel. Set alongside Lough Corrib, in 138 acres of exquisite Irish countryside, this luxurious country hotel offers exceptional service and a double AA rosette restaurant. This is the perfect venue to relax and you can make use of the great facilities that include archery, fishing, and golf.

After a lovely breakfast, you will travel west until you reach Connemara National Park, which is made up of natural heathlands and shimmering lakes. You will journey through the Roundstone Boglands where you might catch a glimpse of wild ponies.

You will stop off for a spot of lunch at Clifden, a quaint marketplace town. Your driver will then take you round Kingstown peninsula. This ten-mile circuit showcases some of the finest natural landscapes in Ireland.

As you travel east you will tour Kylemore Abbey. Situated in a 13000-acre estate, the abbey is left as a permanent memory of a tragic love story. Mitchell Henry built Kylemore Abbey in the late 1800’s for his beloved wife, who unexpectedly died three years after the abbey was finished. Take your time to stroll around the carefully crafted walled gardens and marvel at the archaic walls of the Abbey.

After a long day of touring, you will return to Glenlo Abbey Hotel for a relaxing evening.

After a luxurious breakfast, you will bid a fond farewell to the charming town of Galway. Your next stop will be Hennigans Heritage Centre, to mee Tom Hennigan, who grew up in the thatched cottage which is now the heritage centre. Tom will teach you about the history of the Mayo area and Irish farming techniques. After the tour, you will be treated to a traditional Irish lunch.

You will continue to route north until you reach Benbulben. Referred to as Irelands table-mountain, it stands at over 500 meters above sea level. The limestone structure is one of Mother Nature’s most thoughtful creations.

Just a short drive away is Carrowmore. This Neolithic dwelling is home to over 30 Cairns, some of which are even older than the Pyramids. The highlight has to be the burial tomb which is over 5000 years old. If you can pluck up the courage, it is well worth taking a peek inside.

Weaving through the sculpted coastline and mountainous terrain, you will eventually reach Lough Eske Castle. This luxurious castle hotel sits in splendid isolation on the edge of Donegal town. For many years, the castle was a seat of the famous O’Donnell clan and it is steeped in Irish history. The hotel has a long list of accolades, including “Luxury Hotel of The Year”. This castle hotel really does have it all, a marvellous interior, an archaic outer shell, picture-perfect gardens, and mouth-watering fine dining.

You have reached the last full day of touring and you have a magical day ahead. You will travel through the town of Derry/Londonderry, passing the famous Derry Walls and Bogside which played a pivotal role in the story of Irish independence.

You will meet the north-east coastline and stop at Dunluce Castle. Perfectly perched on the edge of a cliff, Dunluce Castle was a former stronghold of Clan MacDonnell. Enjoy the breath-taking views and learn fascinating tales of the castle, from a mysterious banshee to the kitchen falling into the sea one stormy night long ago.

You will meander around the coast until you reach the Giant’s Causeway. Described by many as the 8th wonder of the world, there are over 40,000 basalt columns rising out of the sea. These hexagonal rocks are over 60 million years old and really are an incredible site to see.

You will then head south through The Dark Hedges and the Glens of Antrim, which comprises 80 miles of sculpted glens and weather-beaten cliffs.

Last, but by no means least, you will reach Belfast, the capital of Northern Ireland. Your chauffeur will take you on a tour of the city, including Belfast Hall, Botanic Gardens and Castle before being dropped off at The Merchant Hotel. Located at the heart of the cathedral quarter, this luxurious 5-star hotel is a grade A listed building with one of the best luxury spas in the whole country.

After an amazing tour, you will bid a fond farewell to the Emerald Isle. Your chauffeur will be waiting and you will be taken to Dublin airport.
As you depart your trip of a lifetime we will bid you a fond farewell. 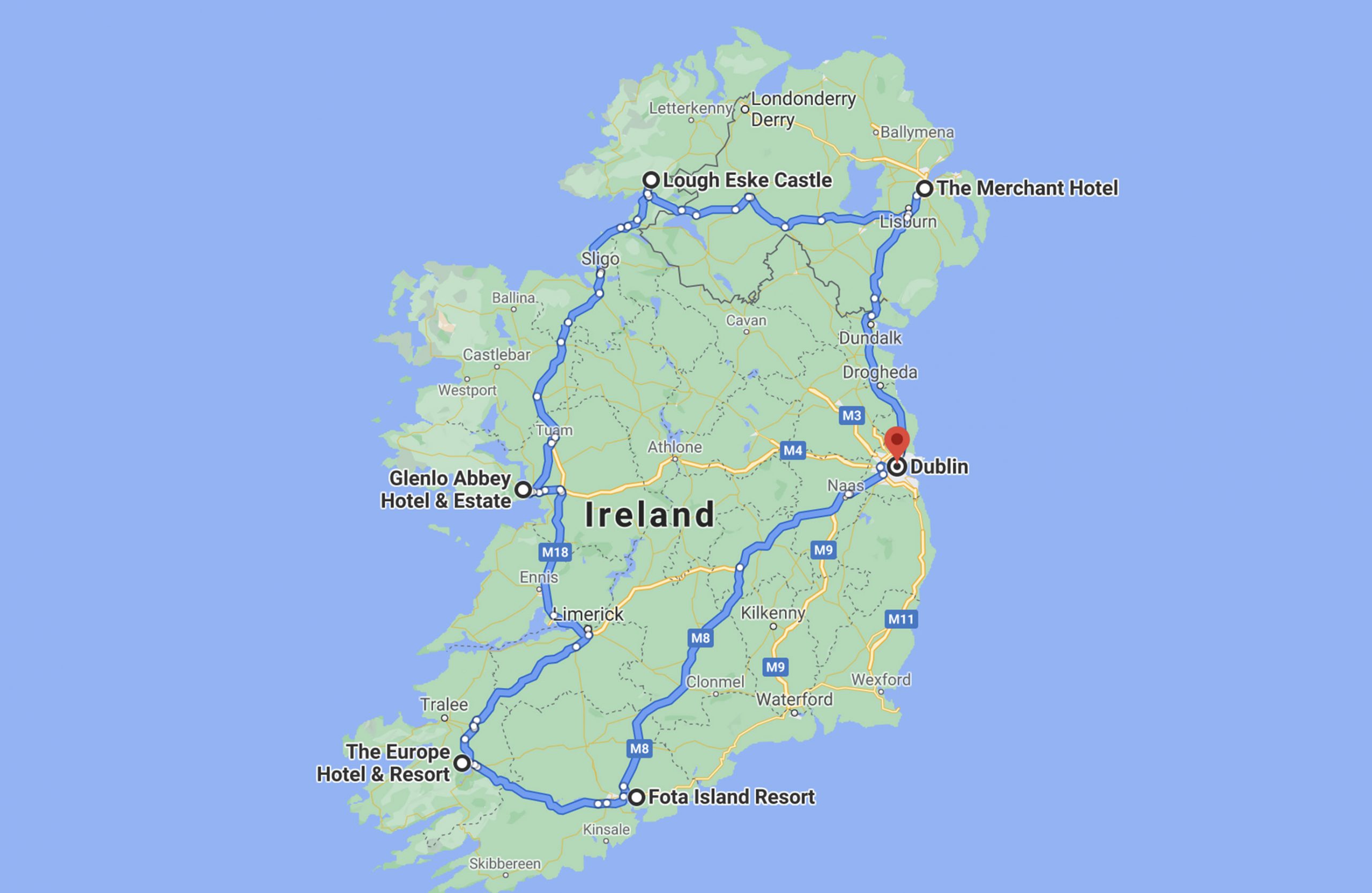 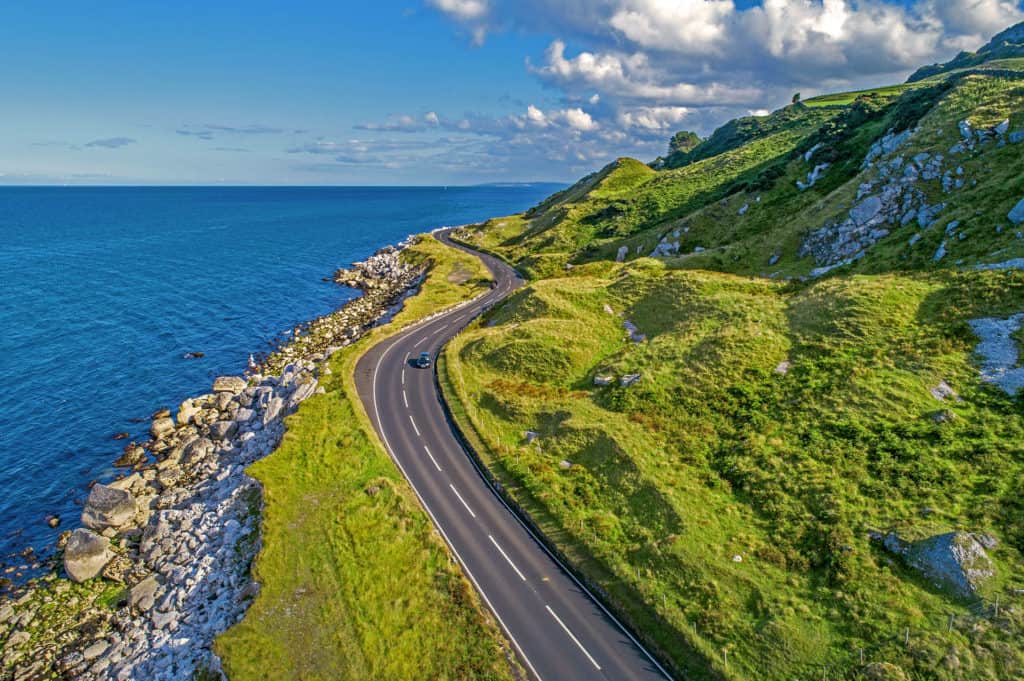 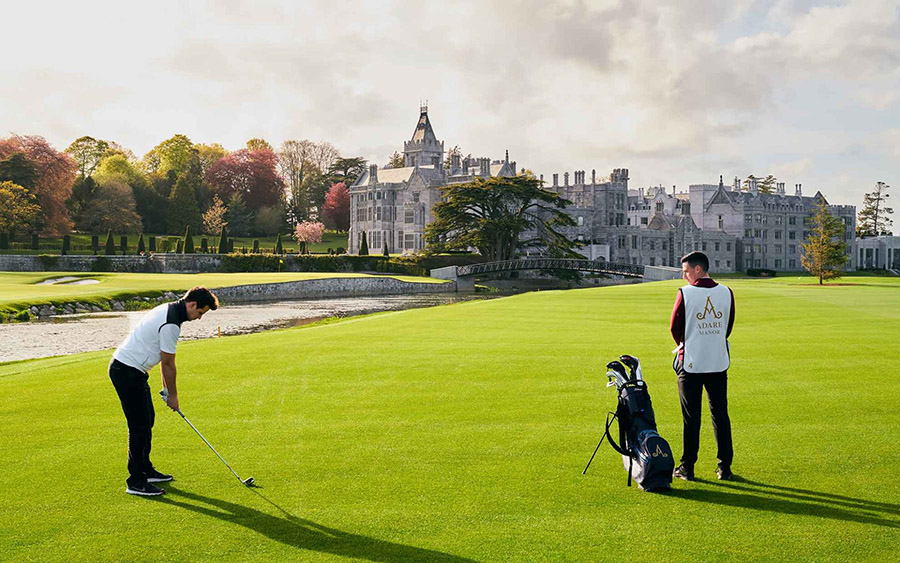